We recently had our 31 month old stud male Auravale Kosmo skin tested for density. Dr Jim Watts from SRS Group made the following comments regarding Kosmo:-

Its density, measured on horizontal skin sections, is very high 71.6 wool follicles per square millimetre. Alpacas usually average about 40 to 50 for density.

On a midside fleece sample, the fibres are growing in length at the rate of 0.38 millimetres per day. The fibres are uniformly long (low SD of 8.3 mm) and highly elastic. The fibres are averaging 26 % longer than the wool length.

The fleece itself is very soft and has a distinct smooth and silky feel. The crimp amplitude is high and the crimp frequency low. With the high density comes superb fibre alignment.
Fibres are easily drafted.

All of this indicates real promise that the animal will breed similarly advanced fleeces that are high in quantity and quality and processing performance.

Physically, the animal is impressive.

I recommend you use this male in your herd as the leading sire.”

Kosmo has only recently started his stud career and is available for outside matings. 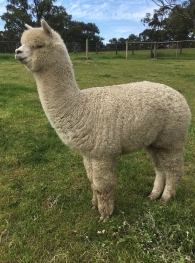